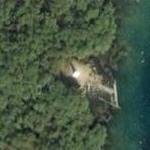 It was during a subsequent visit that Cook was killed. In fairness to the Hawaiians, Cook had been trying to kidnap their king when he and his men were chased back to the beach. And despite murdering Cook, the Hawaiians so esteemed him that they roasted and hacked the flesh from his bones and, according to some accounts, ate it.
Links: www.roadsideamerica.com
1,433 views