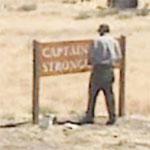 Captain Jack's Stronghold, named for Modoc chief Captain Jack, is a part of Lava Beds National Monument. The stronghold can be accessed from the Perez turnoff, off Highway 139 between Tulelake and Canby, California.

During the Modoc War, Captain Jack's band settled here following the Battle of Lost River, and held off a United States Army force outnumbering them by as much as 10 to 1 for several months. The lava beds made an outstanding stronghold for the Modocs because of the rough terrain, rocks that could be used in fortification, and irregular pathways to evade pursuers.
Links: en.wikipedia.org
425 views