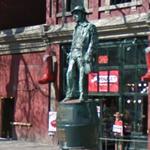 John started out as a Steamship operator for many years of his early life. However he was eventually forced to pursue other lines of work once he developed health problems (swelling of the legs and feet).

Between 1862 and 1867 John Deighton ran a bar in New Westminster, British Columbia. It was quite prosperous due to the Cariboo Gold Rush of 1862, however by 1867 business slowed down and he had to close it down.
Links: en.wikipedia.org
550 views