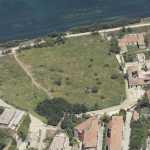 By giove @ 2009-11-30 09:41:03
@ 43.62293766, 13.51839419
Ancona, Italy (IT)
In the city of Ancona from the reports of the "Senate of the elderly" in the Republic of Ancona is learned that in 1428 in area Cardeto is granted land outside the city to benefit St. Peter's cemetery. Just forty years later another piece of land is granted as an extension of the first and again in 1711 the Jewish community bought the convent of San Francesco alle Scale "possession of the Garden", located in the same locality. There is no news of where he was a former cemetery, but there had to be because the community Dorian was certainly existed before 1000. The Field of the Jews, situated between the hill and the hill Capuchin Cardeto, is one of the prettiest spots of Ancona. Consists of 178 memorial pillars with Hebrew inscriptions dating from the fifteenth century to the nineteenth century, is overlooking the sea, so that, over the centuries, many inscribed stones have fallen from the cliff constantly subjected to erosion marina. The large lawn is gently sloping toward Jerusalem, as well as tradition and the first sunrise of the tombstones still standing, all with written views to the east, standing out white on green lawns. Is among the largest Jewish cemeteries in Europe and one of the best preserved and cared for.
Links: it.wikipedia.org
389 views