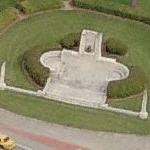 At the south end of the Dixie Highway in Miami, Florida, Fisher became involved in the successful real estate development of the new resort city of Miami Beach, built on a largely unpopulated barrier island and reached by the new Collins Bridge across Biscayne Bay directly at the terminus of the Dixie Highway. Fisher was one of the best known and active promoters of the Florida land boom of the 1920s.
Links: en.wikipedia.org
842 views