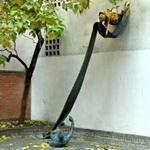 His monument was created by Tamás Szabó in 1991
Links: www.budapest-foto.hu
369 views