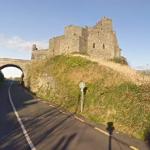 The semicircular western half of the castle was probably built before King John's visit. This curving wall, which enclosed an open courtyard, had two-storey buildings leaning against its inner face; the entrance, on the west side, was flanked by two rectangular towers (only parts of the northern tower remain) and at the south-western corner there is another rectangular tower. The high dividing wall, and the whole of the eastern half of the castle was added in 1261. Here there are tow floors above a basement (now largely filled up). There were a number of rooms on the ground floor; the entrance to this part of the castle was through a door in the first floor, and here was probably situated the great hall of the castle. In 1495 it was decreed that none by and Englishman should be Constable of the castle. Probably taken by Sir Henry Tichbourne in 1642, it was compelled to surrender to Lord Inchiquin in 1649. However in the following year it was delivered to sir. Charles Coote. In 1689. However in the following year it was delivered to sir Charles Coote. In 1689 it was fired upon by the retreating Jacobite forces, and General Schomberg later used it as a hospital. The Mint: Situated in a narrow street just off the Square, this is a 15th century town tower-house with an extended turret over the door. The exterior is remarkable in having mullioned windows which are decorated with some pre-Norman Celtic motifs such as interlacing, as well as a horse and a human head. The stonework has a number of decorative motifs pocked on it. there are three storeys in all, none of which has a fireplace. it is said to have been the site of a mint which was set up in 1467. further down the street is an old town gate, above which is a small room. The Thosel, where the elders of the town met. Dominican Priory: South of the town lies the Dominican priory dedicated to St. Malachy of Armagh, and said to have been founded by Richard de Burgo, Earl of Ulster in 1305. A stone head carved on the exterior east window may be of 13th or 14th century date. But, while blocking or absence of other windows makes dating difficult, much of the surviving structure may be the result of work carried out after 1423, when an indulgence was granted for repairs to the church 'after damage by enemies and robbers'. A gap in the east wall, underneath the window, now gives access to the tall, slender preachers' church which is divided almost in the middle by a 15th century tower. The western end is fortified with turrets at the top corners and a bartizan high above the door, from which to drop things on unwanted intruders. Lying to the south are the remains of two-storey claustral buildings.
Links: www.discoverireland.ie
365 views