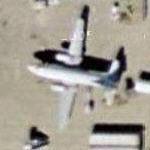 Could be part of the Ventura County Police and Sheriff's Reserve Officer Academy:

"The academy is located at the Camarillo airport facility in mid-Ventura County..." (address is the other end of the irport though.)

Also at this airport is the Ventura County Fire Training Center: