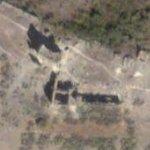 By Effi @ 2008-03-01 05:03:17
@ 38.036034, 13.448011
Misilmeri, Italy (IT)
ruins of an ancient castle consisting of a polygonal tower, some cross-vaults supported by angular columns, and sections of the outer walls. Not much is known about its early history. The ancient construction probably served as a lookout post during the Arab rule. This area witnessed an important battle between Arabs and Normans, the latter ultimately winning. The castle, originally bestowed by Roger of Hautville on his admiral George of Antioch
Links: www.siciliano.it
617 views