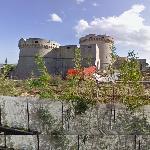 By Mattsie @ 2010-12-13 14:49:22
@ 40.664231, 16.605253
Matera, Italy (IT)
The Tramontano Castle that was begun in the early sixteenth century by Gian Carlo Tramontano, Count of Matera, is probably the only other structure that is above ground of any great significance outside of the sassi. However, the construction remained unfinished after his assassination in the popular riot of 29 December 1514. It has three large towers, while twelve were probably included in the original design. During some restoration work in the main square of the town, workers came across what was believed to be the main footings of another castle tower. However, on further excavation large Roman cisterns were unearthed. Whole house structures were discovered where one can see how the people of that era lived. Found under the main square of the modern city was a large underground reservoir, complete with columns and a vaulted ceiling.
1,022 views