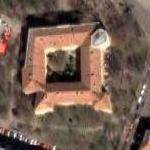 The Castle (today turned into the Banat Museum) was built between 1307 and 1315. Later on, between 1443 and 1447, Iancu de Hunedoara (John Hunyadi) built
another castle on the foundations of the former one. It encircled a rectangular square, having a high ground floor
and two storeys. The voyevod brought his family here and, in the short intervals between battles, the Transylvanian nobles
used to join him at the castle, a witness of many an eventful century of history in Timisoara. In the 18th century, it was
turned into an arsenal and barrackss. Heavily strafed in 1552, 1716, 1849, the castle was rebuilt in 1856 and most of it has survived to this day. During the epoch of Romanticism the castle underwent shapely constructive modifications, following an older architectonic style, with Romanic and Gothic elements. An old part still preserves the original pre-Romantic stone vaults.
Links: www.timisoara.com
1,866 views