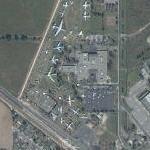 By kjfitz @ 2007-03-10 13:23:19
@ 37.367019, -120.578814
Atwater, California (CA), US
When the closure of Castle Air Force Base was announced in 1994, a group of dedicated enthusiasts in the Atwater-Merced area formed a non-profit organization called the Castle Air Museum Foundation, Inc. Their purpose was to assume custody of the collection of aircraft. It was their dream to build a museum in which faithfully restored historic aircraft could be exhibited for public enjoyment.

Today that dream is a reality.

The museum has 49 aircraft on display ranging from a 1937 Douglas B-18 to a 1992 Grumman F-14D Tomcat including rare aircraft such as the SR-71, B-24 and RB-36. They are representative of aircraft that served from World War II, Korea, Vietnam, the Cold War to the present conflicts. All restored and maintained by our devoted volunteer staff, these aircraft are a tribute to the men and women who designed, built, maintained or flew them.
Links: www.elite.net
962 views