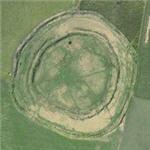 By kjfitz @ 2007-06-21 12:15:18
@ 50.425147, -4.893873
St Columb Major, United Kingdom (GB)
Castle an Dinas is an Iron Age hillfort near St. Columb Major in Cornwall, UK and is considered one of the most important hillforts in the southwest of Britain. It dates from around the second to third century BCE and consists of three ditch and rampart concentric rings, 850 feet above sea level. During the early 1960s it was excavated by a team led by Dr. Bernard Wailes of the University of Pennsylvania. Traditionally, Castle an Dinas is the hunting lodge (hunting seat) of King Arthur, from which he rode in the Tregoss Moor hunt. A stone in St. Columb allegedly bears the four footprints of his horse made whilst hunting.
Links: en.wikipedia.org
655 views