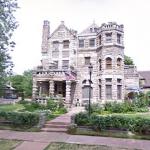 This large house, a mansion in its time, has a long and illustrious history, starting with the land on which it sits. Originally purchased as part of an 80 acre plot by Mr. Wyman two miles east of what was the considered Denver, people thought he was a bit nuts, buying a large parcel of prairie with no real purpose. However, 20 years later, Mr. Wyman was able to take his $3,000 investment and turn it into a $300,000 sale.

The house was originally built as a “model” house – the first of its kind in the Wyman Addition in 1890. Wilbur Raymond and his family only lived in the house for one year before it was lost to creditors.

The house on 16th and Race went through several illustrious owners: Colonel James H. Platt from 1891 to 1894 and John Mason from 1894 to 1918 and Mrs. Edwin Van Cise owned the home from 1918 til 1937. It was Mrs. Van Cise and her son who named the house The Marne, and subdivided the building into a nine apartment house. The neighborhood had also undergone changes: Colfax had become part of Hwy. 40, the road widened, the trees cut down and the buildings repurposed or demolished, with new ones put in their place

After Mrs. Van Cise's death in 1937, the house continued to be an apartment building until the 1970s, when it was purchased and used for offices. In the 1980s, with economic downturns,the building first became a processing center for parolees, then emptied and became abandoned and was heavily vandalized. All that remained from the original house was the mantelpieces. As the 80s continued, people thought the house was haunted; so much so they even crossed the street so as not to be near it.

But in 1988, the Pieker family, unable to resist its clear charms, save Castle Marne.