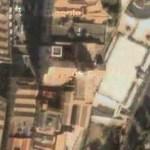 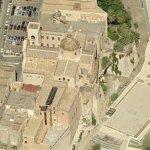 By DonMartini @ 2006-04-21 07:29:18
@ 39.218581, 9.117628
Cagliari, Italy (IT)
The Cathedral is in the Castello Neighborhood. Near the Cathedral are the former City Hall, the Viceregal Palace, and the Archbishop's Palace, all them with beautiful facades. The building was erected in 1200 and in 1664 its choir and transept were renovated and the baroque-like dome was added: in 1702 the façade was changed: in 1933 the façade was changed again, in Tuscan neo-Romanesque style. The cathedral, dedicated to Saint Mary, of the original structure keeps the architrave of the central door, the arms of the transept and the bell tower. The Cagliari Cathedral was erected in the 13th century with a Romanesque style from Pisa and modified many times in the centuries. Today, the template of the central door, the bell tower and the transept are what remains of the original structure. The presbytery leads to the suggestive sanctuary, excavated in stone, which contains the remains of Christian martyrs. The central chapel is remarkable: it is decorated with 584 rose windows. The Capitolare Museum contains the treasure, with an 18th-century golden ostensory with more than 1,500 diamonds.
1,000 views