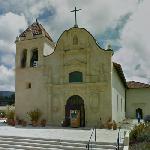 By Mike1989 @ 2013-06-27 03:56:36
@ 36.595918, -121.890338
Monterey, California (CA), US
The Cathedral of San Carlos Borromeo, also known as the Royal Presidio Chapel, is a Roman Catholic cathedral located in Monterey, California, United States. The cathedral is the oldest continuously operating parish and the oldest stone building in California. It was built in 1794 making it the oldest (and smallest) serving cathedral along with St. Louis Cathedral in New Orleans, Louisiana. It is the only existing presidio chapel in California and the only existing building in the original Monterey Presidio.

The church was founded by the Franciscan Father Junípero Serra as the chapel of Mission San Carlos Borromeo de Carmelo on June 3, 1770.
Links: en.wikipedia.org
293 views