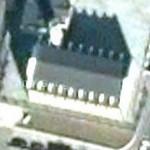 The cathedral, rebuilt at its previous location after it was destroyed by the Allied bombing raids during World War II, was inaugurated on 21 May 2006 in the presence of Cardinal Secretary of State Angelo Sodano, Dean of the College of Cardinals of the Roman Catholic Church. The foundation stone of the new cathedral was laid personally by Pope John Paul II during his visit to Bulgaria in 2002.

The Cathedral of St Joseph has 350 seats and is capable of sheltering a total of about 1,000 people. It is 23 m long, 15 m wide and 19 m high, with the belfry reaching 33 m and having four electronic bells.
Links: en.wikipedia.org
602 views