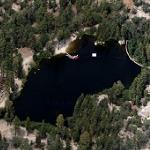 The lake's scenery and proximity to Hollywood made it a popular filming location. It appeared in more than forty films, including:
Brigham Young (1940), High Sierra (1941) and The Parent Trap (1961).

It also appeared in six television series, including:
At least eight episodes of Bonanza a 1959 episode of Have Gun–Will Travel and The Roy Rogers Show.
Links: en.wikipedia.org
592 views