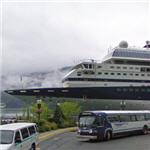 By kjfitz @ 2010-12-20 09:45:26
@ 58.296163, -134.399373
Juneau, Alaska (AK), US
The Celebrity Century, formerly named Century, is the lead ship of the Century-class of cruise ships for Celebrity Cruises, and the co-flagship of the Celebrity fleet, along with Millennium-/lass ship Celebrity Constellation. Other ships belonging to the Century Class are the Mein Schiff (formerly Celebrity Galaxy) and the Celebrity Mercury. Century was launched in 1995 and went into a 5 week drydock in April 2006 whilst undergoing complete refurbishment. Designed to incorporate a variety of Celebrity's Millennium-Class attributes, the revitalization of Century is the line's most extensive refurbishment to-date, and the largest cruise ship modification completed by Fincantieri's Palermo, Italy, shipyard.
Links: en.wikipedia.org
1,072 views