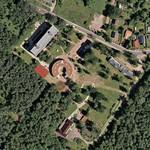 By Dania @ 2010-08-03 07:39:31
@ 52.654318, 13.50871
Berlin, Germany (DE)
The Central Reception Center (Zentrales Aufnahmeheim, in short: ZAH) was a facility of the GDR in Röntgental, Berlin, were in the immigrant and especially settlers and returnees from the Federal Republic of Germany admitted to the examination to become residents of the GDR.

The secret facility was opened in April 1979 by the Ministry of the Interior, and remained as the last of more host homes by spring 1990. It could hold up to 117 people.

In the early 1980s provided for the establishment of a total of 112 employees who were from the Department of Criminal Investigation (Working Group of the People's Police, 51 employees), the field of Internal Affairs (32 employees) and the operation of protection commands of the People's Police Pankow (29 employees). There were also 19 full-time staff of national security. In the period 1981-1985 in the facility in 1100 people were examined, more than half of the people was rejected. The new residents were screened to continue their settlement in the GDR by state security and public police.

During their stay in the facility wasn’t allowed to leave the fenced grounds. There were routinely held multiple hearings by the state security and public police. Gained public attention through the creation of reports of returnees, who testified that their residence had been connected with incarnation like circumstances and intimidating interrogations. During stay, people had been left to the future fate of their person and their family in the dark and been worn down. Some people would have taken under these circumstances, the life.
Links: www.ddr-rueckkehrer.de
443 views