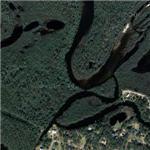 By kjfitz @ 2009-01-13 16:30:26
@ 30.644374, -87.006011
Milton, Florida (FL), US
Marcus Schrenker is a financial manager from Indianapolis, Indiana.[1] On January 12, 2009, he apparently made a false distress call from his private plane, set the plane on autopilot, and parachuted out of it, landing somewhere in Santa Rosa County, Florida. The wreckage of the plane was found north of Milton, Florida. After safely parachuting to the ground, Schrenker apparently contacted local police and claimed to have been in a canoeing accident. Police were reportedly skeptical of the story, but did not link Schrenker to the crash, and brought him to a local motel. Schrenker is believed to have checked into the motel under a false name. He disappeared soon afterwards. Recent reports indicate that he retrieved a red Yamaha motorcycle with saddlebags that he had stashed in a storage facility several days earlier.

Schrenker, who remains at large, is under investigation by the Indiana Securities Division for possible Securities Fraud. He had recently lost a court ruling against one of his companies and is in the midst of divorce proceedings. There is speculation that these could have motivated what appears to have been an effort to fake an accident and his own death.
Links: www.wkrg.com
870 views