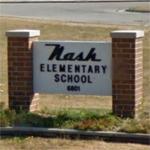 Before forming his own company, Charles W. Nash co-founded Buick and was an executive at General Motors.