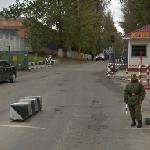 A closed administrative-territorial formation was established on the territory of the closed military townlet #22/1 on January 19, 2009. On August 5, 2009, Boris Gromov, the Governor of Moscow Oblast, issued a Resolution which transformed the military townlet into an urban-type settlement. On October 29, the urban-type settlement was named "Vlasikha"; however, as of 2011, this name is not yet official pending the approval by the Government of Russia.
Links: en.wikipedia.org
1,462 views