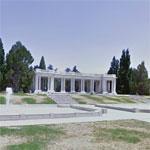 By jbottero @ 2011-09-13 22:31:52
@ 39.732543, -104.965932
Denver, Colorado (CO), US
Cheesman Park is located in central Denver, southeast of downtown. The Park has inexact borders, as it is framed on 3 sides by private residences, but is located in center of the Cheesman Park neighborhood, between Humboldt Street on the west, Race Street and Denver Botanic Gardens on the east, 13th Avenue on the north, and 8th Avenue on the south.

In the late 19th century, the land that is now Cheesman Park was Prospect Hill Cemetery, which also included the land that is now the Denver Botanical Garden and Congress Park further east. The long-disused cemetery was converted to a park which opened in 1907, after city planners felt it would provide an amenity to new residents as land development moved east of the central city.
Links: en.wikipedia.org
2,169 views