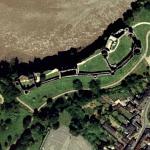 By Hinkkanen @ 2006-06-03 11:06:44
@ 51.644165, -2.675652
Chepstow, United Kingdom (GB)
Chepstow Castle, located in Chepstow on top of cliffs overlooking the River Wye, was built by the Norman lord William FitzOsbern from 1067. It was the southernmost of a chain of castles built by FitzOsbern along the English-Welsh border. It was constructed in stone from the first (as opposed to wood, like most others built at this time), marking its importance as a defensive stronghold on the border between England and Wales.

Further fortifications were added over the succeeding centuries by William Marshal and son around 1200 and by Roger Bigod III in the 1270s. From the 14th century and the end of the wars between England and Wales, its importance declined.

From the 16th century, the castle was mostly used for living, though it was to see action again in the 17th century during the English Civil War, when it was held by the Royalists. After the war, the castle was used by a prison, but from 1690 onwards it was left to decay. It is now largely a ruin, and in the care of Cadw.
Links: www.castlewales.com
1,047 views