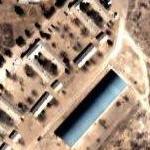 By kjfitz @ 2005-08-06 16:31:39
@ 30.299056, -104.026258
Marfa, Texas (TX), US
The town of Marfa, at the southern edge of West Texas, has been transformed by the presence of the artist Donald Judd, who established the Chinati Foundation there, along with his residence and studio complexes. Judd, who died in 1994, was an internationally known minimal artist, who turned more towards architecture in his later years. He bought the abandoned Army installation south of town, along with numerous buildings in town, and installed several permanent sculptures of his own, and by other artists such as Richard Chamberlain and Claes Oldenberg. The nonprofit Chinati Foundation, which operates out of the old army base, has a residency program, and exhibits work of numerous artists.
Links: www.chinati.org
786 views