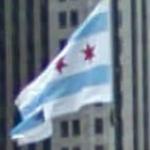 By kkeps @ 2011-10-16 11:16:34
@ 41.889523, -87.621616
Chicago, Illinois (IL), US
The municipal flag of Chicago consists of two blue horizontal stripes on a field of white, each stripe one-sixth the height of the full flag, and placed slightly less than one-sixth of the way from the top or bottom, respectively. Between the two blue stripes are four red, six-pointed stars arranged in a horizontal row. The stripes represent geographical features of the city, the stars symbolize historical events, and the points of the stars represent important virtues or concepts.

In a review by the North American Vexillological Association of 150 American city flags, the Chicago city flag was ranked second best with a rating of 9.03 out of 10, behind only the flag of Washington, D.C.
Links: en.wikipedia.org
482 views