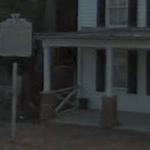 The back yard — its landscaping, limestone steps, and a side yard fence — appears much as it did in photographs of Cline decorating a convertible for Winchester’s annual Apple Blossom Festival parade, an event she participated in as a rising star.
Links: heavens-gates.com
568 views