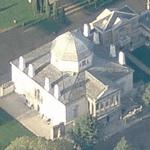 The octagonal domed Palladian villa is inspired by the Villa Capra "La Rotonda" near Vicenza and at the same time a fine example of 18th-century architecture, with its colonnaded portico on the upper storey, the frescoed ceilings, the velvet rooms and the stone rooms. It differs from the Villa Capra in having three different designs to the facades (front, back, and two matching sides) rather than being symmetrical all the way round. There is also a superb collection of paintings and palladian furnishings.
Links: www.chgt.org.uk
1,396 views