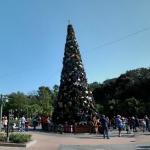 By kjfitz @ 2013-12-30 19:21:36
@ 28.354763, -81.590265
Kissimmee, Florida (FL), US
Disney's Animal Kingdom is the fourth of four theme parks built at the Walt Disney World Resort in Bay Lake, Florida, opened on Earth Day, April 22, 1998. It is the second largest theme park in world, behind Six Flags Great Adventure in Jackson, New Jersey, and it is the largest single Disney theme park in the world, covering 500 acres (200 ha), and is also the first Disney theme park to be themed entirely around animal conservation, a philosophy once pioneered by Walt Disney himself. Disney's Animal Kingdom is accredited by the Association of Zoos and Aquariums and the World Association of Zoos and Aquariums, meaning they have met or exceeded the standards in education, conservation, and research. In 2011, the park hosted approximately 9.8 million guests, ranking it the fourth-most visited amusement park in the United States and seventh-most visited in the world.