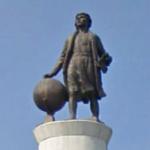 By adrbr @ 2011-11-10 15:49:02
@ 20.695575, -103.373125
Guadalajara, Mexico (MX)
Christopher Columbus (c. 31 October 1451 – 20 May 1506) was an explorer, colonizer, and navigator, born in the Republic of Genoa, in northwestern Italy. Under the auspices of the Catholic Monarchs of Spain, he completed four voyages across the Atlantic Ocean that led to general European awareness of the American continents in the Western Hemisphere. Those voyages, and his efforts to establish permanent settlements in the island of Hispaniola, initiated the process of Spanish colonization, which foreshadowed the general European colonization of the "New World".