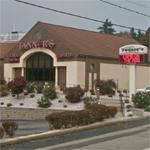 Tanner played in 396 games over eight seasons (1955-62) with the Milwaukee Braves, Chicago Cubs, Cleveland Indians, and Los Angeles Angels. He was the 7th player in history to hit a home run off of the first pitch in his career. As of August 2014, only 28 players have managed that feat.

The year after retiring as a player, he was hired as a minor league manager for the Angels. Eight years later, he began his Major League managing career as a late season replacement with the Chicago White Sox in 1970. After 5+ seasons with the Sox, he spent one year managing the Oakland Athletics, 9 seasons with the Pittsburgh Pirates, and a little more than 2 seasons with the Atlanta Braves.

In 1979, Tanner won the World Series with the Pirates. His hometown of New Castle is about one hour north of Pittsburgh.