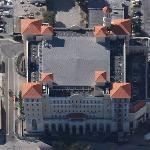 The November 2013 christening ceremony brought a crowd of less than 6,000, but included stars such as Tom Cruise, John Travolta, and Kelly Preston.

The crown jewel of the building is on the 5th floor which is where members can participate in 'The Super Power Program' where, as part of that therapy, members will be spun on an anit-gravity simulator blindfolded to improve their 'perceptics' - Hubbard's 57 senses which include sight, smell, taste, blood circulation, and awareness of awareness.
Links: www.tampabay.com
988 views