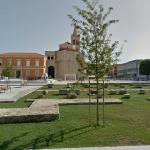 The church was mentioned for the first time in mid 10th c. in the documents of the Byzantine emperor Konstantin Porfirogenet. Today its space is used, due to its extraordinary acoustic features, for musical performances ("Musical Evenings in Saint Donat").
Links: en.wikipedia.org
694 views