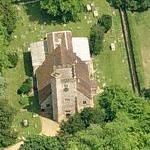 By kkeps @ 2009-02-12 18:18:52
@ 50.960113, -1.136186
Droxford, United Kingdom (GB)
﻿It is believed that a Saxon Church existed previously in the parish before the building of the present church. The earliest parts the Church dates from the middle of the 12th Century (1150-1160).This consisted of nave and apse chancel. The walls of the nave remain today much as they were when first built, except where they were subsequently cut into arches opening into the aisles. The massive square pillars are sections of the outside walls of the Norman building. The fine Norman doorways in north and south walls belong to the original church. There was further work done in the 13th Century when the north aisle and a chapel (now used as a vestry) were built. In the 14th century the south aisle and chapel added to the church. The tower has a date of 1599 carved above it. It is not certain if this date relates to the building of tower or to some restoration during Tudor times. The tower contains a peal of five bells, the oldest being dated 1606. The Church was carefully restored in 1903.
Links: www.waymarking.com
557 views