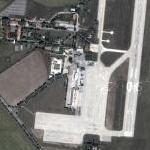 Admiral Turner, a former head of the CIA, claimed in an interview that the secret CIA prisons used for torture are known as 'black sites', terror suspects are picked up in places like Afghanistan and Pakistan.

They are flown by CIA-controlled private aircraft to countries where there are secret interrogation centres, operating outside any country's jurisdiction.

No one will confirm their locations, but there are several possibilities: The Mihail-Kogalniceanu military airbase in Romania is believed by many to be one such facility.
Links: www.itv.com
6,179 views