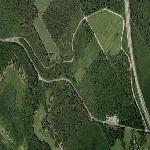 
From its opening in 1950, Rouen-Les-Essarts was recognized as one of Europe's finest circuits, with modern pits, a wide track, and spectator grandstands. The circuit (which ran on public roads) had a few medium straights, a cobbled hairpin turn (Nouveau Monde) at the southernmost tip, and a few blind corners through a wooded hillside The appeal was greatly enhanced by the climb from Nouveau Monde at 56 metres to Gresil at 149 metres.


Rouen hosted five Formula One French Grand Prix races, the last one in 1968 resulting in the tragic burning death of Jo Schlesser, at the fast downhill Six Frères curve. The circuit continued to host major Formula 2 events until 1978, after which it was used for various French Championships.


The circuit had a number of different configurations. From its construction in 1950 until 1954 it was 5.1 km (3.2 mi) in length. In 1955 major works increased the circuit's length to 6.542 km (4.065 mi), its most famous configuration. Construction of a new Autoroute across the circuit saw a new section of track built and the length of the circuit reduced to 5.543 km (3.444 mi). Finally, in 1974 a permanent chicane was built at Six Frères and this part of the circuit was renamed Des Roches.


The circuit was closed down in 1994 due to economic and safety reasons, since it is very hard to organise a race on public roads if modern safety standards are to be met. In 1999, following the circuit's closure all evidence of area's racing past was demolished, including grandstands, pits, Armco and track signs. The cobbled Nouveau Monde hairpin was also asphalted but it is still possible to drive around on the original circuit configuration.


The name "Les Essarts" comes from a village, which was included into the commune of Grand-Couronne in 1874.
Links: en.wikipedia.org
980 views