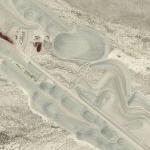 By kjfitz @ 2006-05-14 22:54:54
@ 38.03398045, -115.44327425
Nevada (NV), US
"Approaching its completion after more than thirty years, Michael Heizer's enourmous masterwork evokes Modernist architectures filtered through the pre-Columbian structures he visited in his youth with his father, anthropologist Dr. Robert Heizer. While Heizer's health problems have hampered his ability to work on this piece, his passion for it seems to burn just as hot and inspire those around him to bring it to conclusion. Destined by its evocative form and sheer size to be one of the crowning achievements of the Land Art movement."
[daringdesigns.com]

City, Michael Heizer's life-long project, is quite possibly the largest piece of contemporary art ever attempted. Because the artist is a very private individual, little is known about City, except that he has been working on it since 1972 (he claims 1970). Located in the remote desert of Nevada, City comprises five phases, each consisting of a number of structures referred to as complexes.

Phase One, about which most is known, consists of three complexes, which are pictured above and below. "Complex Two" (seen above), the largest complex in the Phase One, is estimated to reach 70-80 feet in height and a quarter mile in length. The complexes are made mostly of earth, and were inspired in part by Native American traditions of mound-building and the ancient cities of Central and South America. They include massive decorations, such as "stele" on Complex Two, and large, geometrically shaped metal bars on Complex One.

Newly released pictures of a complex in Phase Five of City depict a complicated structure of wedges and shapes named "45º, 90º, 180º" (a name Heizer has used previously for works at The Museum of Contemporary Art, Los Angeles, CA and at Rice University, Houston, TX). The form of "45º, 90º, 180º," like that "Complex One" (which appears in the background of the picture below), is a play on perspective; when viewed from the front, it appears as one simple shape; only from the side or above does its true complexity come to light. This emphasis on the experience of art from different viewpoints and through time is a recurring theme of Heizer's work.

The construction of City was originally self-supported, with early funds from gallery-owner Virginia Dwan (who supported his work on Double Negative). Heizer now receives funding from the Dia Art Foundation, through grants (of undisclosed amounts) from the Lannan Foundation, the Riggio family, and the Brown Foundation. With this more stable source of funding, work on City--the total cost of which may run to $25 million--now progresses at a much more rapid pace, and should be completed sometime before 2010.
Links: doublenegative.tarasen.net
8,353 views