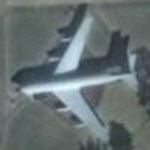 By kjfitz @ 2007-03-10 15:43:43
@ 37.367441, -120.579527
Atwater, California (CA), US
The Boeing KC-135 Stratotanker has the distinction of being the only aircraft designed primarily for the mission of aerial refueling. It can also carry passengers or cargo as all the refueling equipment is below the main cabin deck. Although it strongly resembles the Boeing 707 commercial transport, it is a different aircraft. It entered into active service in 1957 and still serves as the backbone of America's tanker fleet. The two principal versions now in service are the KC-135E, upgraded with 18,000 lb. thrust TF-33 turbofan engines, and the KC-135R, upgraded with 22,000 lb. thrust CFM-56 turbofan engines, new cockpits and avionics. Many other special modifications of the KC-135 also continue in service.

The KC-135 served with distinction as part of the Strategic Air Command (SAC), serving as a vital link in the Command's role of nuclear deterrence. They served to provide aerial refueling when bombers were kept on around the clock nuclear alert. When the bombers went to ground alert, the KC-135 joined them, until the end of alert duty when SAC was stood down by President Bush in November 1991. In 1992, SAC was retired and the bulk of the KC-135 fleet now belongs to the Air Mobility Command (AMC).

The KC-135 served in combat during the Vietnam Conflict and Desert Storm. It also provided refueling support for many operations, both military and humanitarian, such as Operation Restore Hope in Somalia. It continues to serve wherever U. S. forces are engaged.

The KC-135 has evolved over 30 different variants. These roles vary greatly with KC-135s now performing as airborne command posts, weather aircraft, transports, and highly specialized electronic reconnaissance aircraft. The first KC-135 entered service at Castle Air Force Base in 1957 where crew training took place until the base closed in September of 1995.

The aircraft on display at the Castle Air Museum is a fitting tribute to the men and women of Castle Air Force Base. It began and ended its service life assigned to Castle's 93rd Air Refueling Squadron. It arrived in October 1957 and flew its last mission on January 27, 1993. It is a combat veteran, serving in both Vietnam and Desert Storm. Its nose art designates it as The City of Atwater, reflecting the support given the Museum and Castle Air Force Base from its host community.
Links: www.elite.net
1,912 views