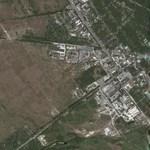 By DonMartini @ 2006-01-06 16:34:31
@ 51.269863, 30.226479
Chernobyl, Ukraine (UA)
The Chernobyl accident occurred on April 26, 1986, at the Chernobyl nuclear power plant (originally named after Vladimir Lenin) in Ukraine (then part of the Soviet Union). It is regarded as the worst accident in the history of nuclear power, producing (due to a lack of a full containment building) a plume of radioactive debris that drifted over parts of the western Soviet Union, Eastern Europe, Scandinavia, UK, and eastern USA. Large areas of Ukraine, Belarus, and Russia were badly contaminated, resulting in the evacuation and resettlement of roughly 200,000 people. About 60% of the radioactive fallout landed in Belarus.
6,817 views

DonMartini
@ 2006-07-08 05:05:58
Impressive images of Chernobyl and the surrounding villages: http://home.cc.umanitoba.ca/~dmcmill/Pages/Villages/Villages%20thumbs.html