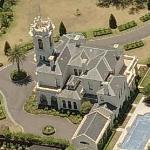 The property was also occupied for over 40 years by the RAAF, after being compulsorily acquired in 1943. Frognall played an important role in the RAAF communications network in the 1939-45 war.

The property for retained nearly its whole sub-division lot of 1859 within a suburb elsewhere closely sub-divided, until 1993, when the rear half was subdivided. The core of a decorative garden and drive, in the same form as laid out within the first decade after the construction of the house still survives.
Links: vhd.heritage.vic.gov.au
599 views