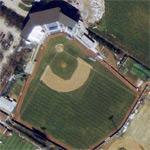 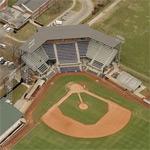 By neotrix @ 2010-11-08 13:34:37
@ 38.02762148, -84.49872296
Lexington, Kentucky (KY), US
liff Hagan Stadium, or more fully Shively Field at Cliff Hagan Stadium, is a baseball stadium in Lexington, Kentucky. It is the home field of the University of Kentucky Wildcats college baseball team. The stadium, which currently holds 3,000, opened in 1969 as part of the Bernie A. Shively Sports Center, which also includes the school's track and field facilities in an adjacent stadium. The stadium was renamed in 1993 in honor of Cliff Hagan, the Basketball Hall of Famer who had played at Kentucky during the 1950s under Adolph Rupp and returned to Kentucky as athletic director after his professional basketball playing days. It was extensively renovated in 2002.
Links: ukathletics.com
1,217 views