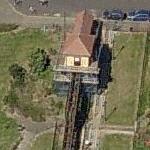 The original single carriage could carry a maximum of 30 passengers the 57 feet up the cliffs from the foreshore below to the bandstand and gardens above. The 4 feet 6 inch gauge track is 130 feet in length with a 1:2.3 gradient. The counter-balance weight runs on a 1 foot 9 inch gauge track underneath this.

The main steel structure remains original today but R. Waygood & Co Ltd., which later become Waygood Otis Ltd. and then Otis Elevators Co Ltd., carried out reconstruction work on the cliff railway in 1930 and 1959. Work in 1930 included the installation of a new carriage. in 1959 both the upper and lower stations were rebuilt and another new carriage was installed.

Other work carried out in 1959 included the replacement of the old resistance control gear by the Ward-Lennard system now employed. The power to operate the counter-balanced carriage is supplied by a 24hp 160 volt D.C motor supplied by an A.C three-phase and single-phase generator with a rotary convertor. The current braking system was also fitted at this time. The drum braking system is attached to the main drive and is released electro-magnetically.

Unfortunately in June 2003 the Cliff Lift ceased to operate due to technical problems. Since that time regulations governing the operation of the Lift have changed and until modifications to the Lift can be agreed and implemented, it will remain closed.

However Heritage Lottery funding for the Cliff Gardens has enabled refurbishment of the both the upper and lower stations of the Lift, and this work has now been completed.
Links: www.southend.gov.uk
1,043 views