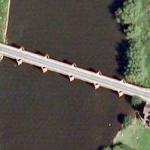 Clifton Hampden Bridge was designed by Sir George Gilbert Scott and opened in 1867. From its opening a toll was payable but this ceased in 1946 when the County Councils of Berkshire and Oxfordshire joined to buy the bridge from its private owners.
Links: en.wikipedia.org
800 views