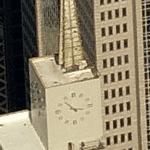 The Mercantile Building was built at the southeast corner of Main and Ervay streets and spans from Main to Commerce Street along Ervay. At its completion, it was the tallest building west of the Mississippi River and it was the tallest building in Dallas until 1954, when Republic Bank Tower 1 surpassed it. The building is 31 stories, and when the 115 feet (35 m) foot ornamental clock tower is included, is 545 feet (166 m) feet tall; making it the 19th-tallest building in Dallas. It also contains 359,348 square feet (33,385 m²) 359,348 square feet of floor space.
Links: en.wikipedia.org
1,521 views