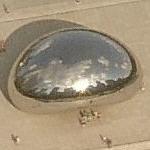 The sculpture is shaped like an ellipse, and its legume-like appearance has caused it to be nicknamed “the Bean”. It is made of 168 highly polished stainless steel plates, and stands at 33 feet high, 66 feet long, and 42 feet wide, weighing 110 tons. From a distance it looks like a huge drop of liquid mercury, while up close it is highly reflective, capturing the skyline, the downtown cityscape and the warped images of passers-by. The artist, Anish Kapoor, has referred to the sculpture as “a gate to Chicago, a poetic idea about the city it reflects”.

The sculpture is like a fun-house mirror, reflecting and dislocating people's images. The artist has transformed the sculpture's two-dimensional physical structure into three-dimensional space. This effect is most dramatic in the 12-foot underbelly (which the artist refers to as the "omphalos" or navel), where people's reflections are multiplied in the vortex.
Links: en.wikipedia.org, www.adventurist.net
1,685 views