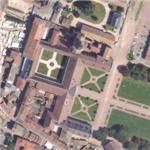 Cluny was founded by William I, Duke of Aquitaine in 910. He nominated Berno as the first Abbot of Cluny, subject only to Pope Sergius III. The Abbey was notable for its stricter adherence to the Rule of St. Benedict and the place where the Benedictine Order was formed, whereby Cluny became acknowledged as the leader of western monasticism. The establishment of the Benedictine order was a keystone to the stability of European society that was achieved in the 11th century. In 1790 during the French Revolution, the abbey was sacked and mostly destroyed. Only a small part of the original remains.

Dating around 1334, the abbots of Cluny had a townhouse in Paris known as the Hôtel de Cluny, what is now a public museum since 1833. Apart from the name, it no longer possesses anything originally connected with Cluny.
Links: en.wikipedia.org
754 views