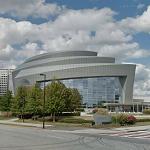 Located in Cobb County near Vinings, the venue is owned and operated by the Cobb-Marietta Coliseum & Exhibit Hall Authority, and took over two years to build. The naming rights for the facility were acquired for $20 million by Cobb Energy Management Corp. Real estate developer Williams' personal donation of $10 million led to the theater itself being named in his honor.

The building was shown as the CDC headquarters, Atlanta in Episodes 5 and 6 (Season Finale) of AMC (TV channel) series- The Walking Dead.
Links: en.wikipedia.org
573 views