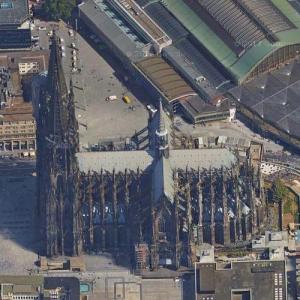 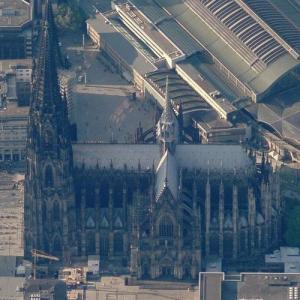 By DonMartini @ 2006-04-24 11:08:50
@ 50.9418821, 6.95799727
Cologne, Germany (DE)
The Cologne Cathedral (German: Kölner Dom, official name Hohe Domkirche St. Peter und Maria) is one of the best-known architectural monuments in Germany and has been Cologne's most famous landmark since its completion in the late 19th century. The cathedral is under the administration of the Roman Catholic Church and is the seat of the Archbishop of Cologne. From 1880, when its spires were completed, it was the world's tallest structure, losing its title on the completion of the Washington Monument in Washington DC, 1884. Cologne Cathedral remains the second-tallest Gothic structure in the world; only the steeple of the Ulm Münster is higher.

Construction of the gothic church began in 1248 and took, with interruptions, more than 600 years to complete - it was finally finished in 1880. The two towers are 157m tall, the cathedral is 144m long and 86m wide. The cathedral is dedicated to Saints Peter and Mary.

It was built on the site of a 4th century Roman temple, a square edifice known as the 'oldest cathedral' and commissioned by Maternus, the first Christian bishop of Cologne. A second church built on the site, the so-called "Old Cathedral", was completed in 818. This burned down on April 30, 1248.
Links: en.wikipedia.org
2,772 views