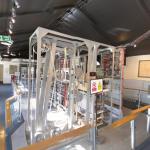 Colossus was the world's first programmable, electronic, digital computer. The Colossus computers were developed for British codebreakers during World War II to help in the cryptanalysis of the Lorenz cipher.